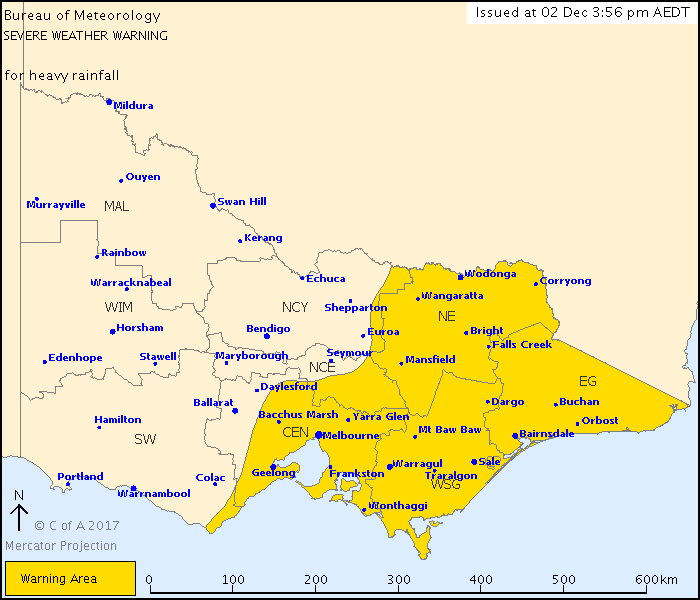 Ambulance Victoria paramedics and volunteers have responded to over 1,000 triple zero calls today as storms pass over the state.

Melbourne, Geelong, parts of central Victoria, and the state’s east remain under a severe weather warning issued by the Bureau of Meteorology.

Residents are warned of heavy rain and thunderstorms which may lead to flash flooding this evening, with north-eastern regions most likely to be affected.

Between 20mm and 50mm of rainfall is expected for areas covered by the warning, with up to 100mm possible around the Great Dividing Range.

Falls are expected to ease from tomorrow morning.

Several areas are covered by flood warnings. You can find the full list at the BoM’s Victorian warnings website.

BoM stats from 3.56pm show Mount Wombat, 127 km north east of Melbourne, has received the most rain from the storms with a recording of 200mm.

Gooram has recieved 188mm, just ahead of Stump Hill’s 187mm.

Strathbogie and Morella have recorded 182mm of rain.

Ambulance Victoria has repeated calls to not drive through or play in floodwaters. The BoM has also advised against walking or riding through flooded areas.

For the latest weather warning information, visit the BoM website.