D-Generation’s Michael Veitch on the changing face of Australian comedy… and his new play. 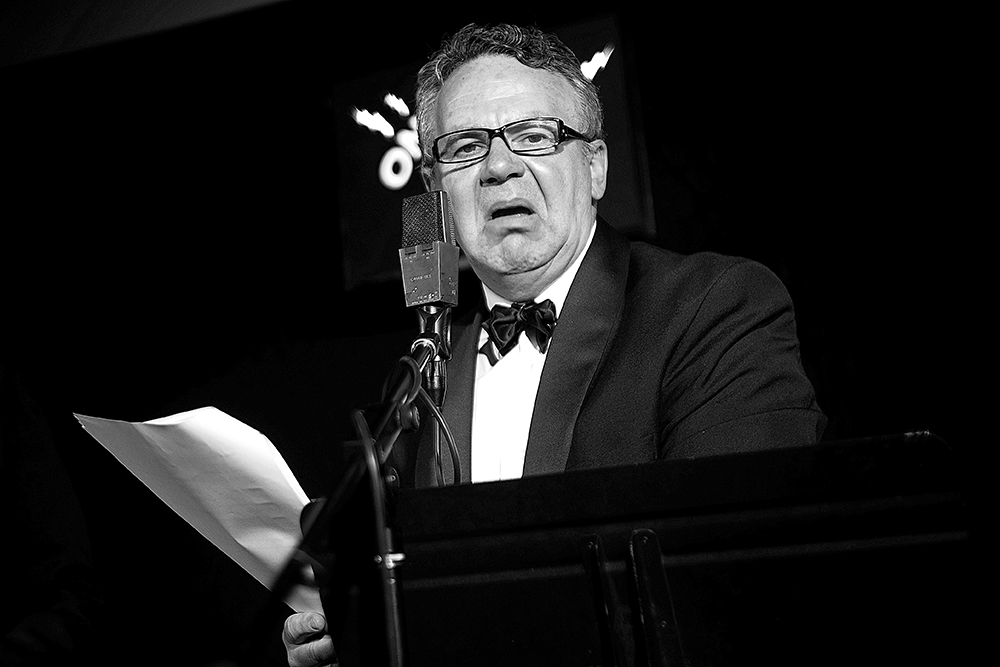 Image: Michael Veitch in character for Mystery In The Air. Images: supplied.

The digital media revolution has brought us a lot of great new entertainment, but increasingly it isn’t on tele.

An abundance of digital channels has created the illusion of choice while spreading advertising revenue thinner between shows.

On top of that, what people are interested in and how they watch it has changed so much that many young people don’t even own a television.

So where does that leave those entertainers who made their name in formats which are difficult to fund today? In the case of Australian comedian and author Michael Veitch, known for his roles in The D-Generation, Fast Forward, and Full Frontal, you end up parodying an even older, deader format: radio plays.

We had a chat with Michael about the upcoming play, Mystery In The Air, a creation of his and co-star Simon Oats. We also asked him what he thinks of the state of comedy in Australia today.

What exactly is Mystery In The Air?

This show started just by myself and my partner in crime, Simon Oats, mucking and talking about the days of radio drama and how much fun it would have been. I have worked in radio, and radio drama is largely a thing of the past. So what we decided to do is just start looking at a couple of old, out-of-copyright radio scripts. And they were really funny, often really bad funny, and we decided to just perform two of them in a show for our local restaurant. It went so well we decided we should actually try to make something of this, and not just getting payers up to hear us do radio plays.

It’s a completely original show, even though it utilises two original, although highly adapted, radio scripts from the 1930s and 1940s. It’s set just after the war where the hit show of the week is called Mystery In The Air. It’s a radio play put together by an old stalwart of radio played by myself, Clifton, and it has been going really well. But there’s a new kid on the block who’s a young gun and a very good actor.

The play is about the changing of the guard. Clifton, my character, is a kind-of-delightful but ploddy, old-fashioned, very professional radio actor and writer. Simon’s character, Tony, is the younger, brash star who’s in it for the money and fame and girls. The two have this incredible clash during a show, [but they still] have to put the show to air.

The play itself is a wonderful Peter Lorre, spooky, waxworks genre horror, and it’s in the ad breaks where what’s going on in their lives is revealed. Clifton actually has this fabulous idea for a new radio format called talk-back, which he’s trying to sell to his station. Then it’s revealed (spoiler alert) they’ve given the new show to Tony, so at the end of the first act poor old Clifton’s life, personally and professionally, is virtually in tatters.

The billing for the show boasts ‘two actors, 50 characters, over 100 sound effects.’ It sounds like it could be a slapstick disaster – how have you managed to put it together?

Well at the end of it, without wanting to give too much away, the whole thing breaks down in a fight scene which is incorporated in the denouement of the second play. It gets out of hand and management has to step in to separate these two people who are at each other’s throats.

Part of the attraction in the play is the fact both Simon and I are good at voices, and in the 1940s actors did sound effects themselves. It was all foley; things being crunched and broken.

For an audience, it’s great fun on at least two levels: seeing Simon and I bring a play to life with the sound effects and our voices, and also the overarching drama between these two men. 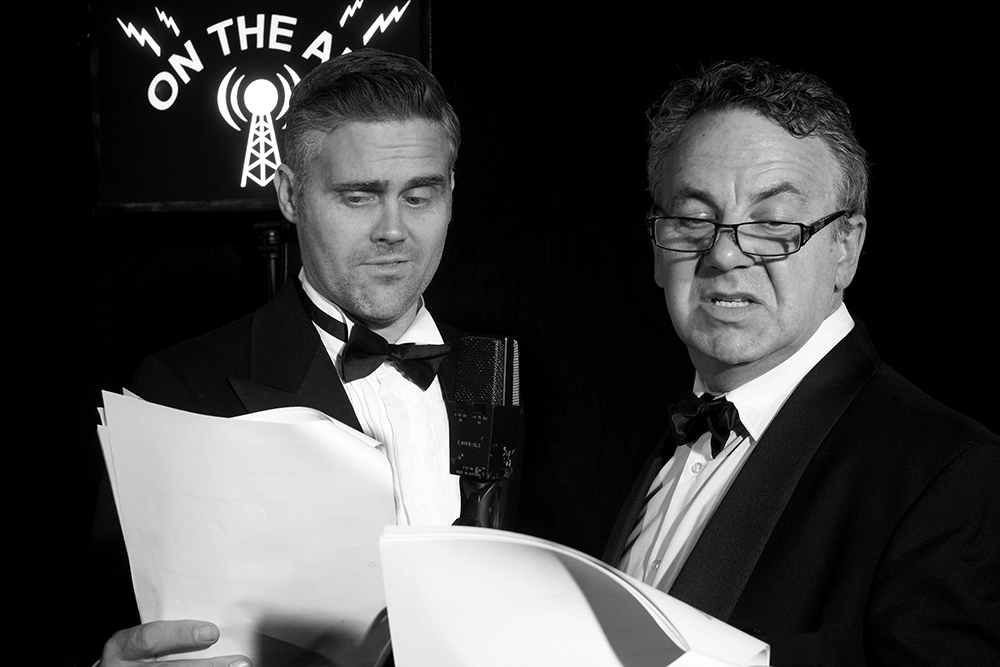 You actually just touched on my next question, which was about translating a radio play to the stage: you’re standing behind two microphones and one wouldn’t think there’s much to see during one of these kinds of shows. What are you doing differently?

What makes it a play is what’s happening is the drama which unfolds increment by increment in these two men’s lives at a personal and professional level.

Poor old Clifton, who represents the old guard of true theatre, is being usurped by this young blood who’s handsome, and has charisma, and is the station’s darling.

You were talking about your character being the old guard – you yourself started in comedy in 1985, which wasn’t all that recently. Do you identify with Clifton?

Oh, yeah, frighteningly so! We (The D-Generation) were regarded as the young usurpers when we came along. Anyone who’s new on the block [provokes responses of] ‘oh my god, he’s not respecting the craft, they’re young, they don’t know anything.’

But it’s the post-war boom which is what this play is all about, and the gradual change in attitudes. Clifton is the last gasp of the old guard, and Tony represents what came in after the war and continued to come in in the next 20 to 30 years, and the rapid social change which is still evolving now.

I certainly have been doing it for a long time, and Simon is quite a bit younger than me, and the roles are quite suited to us! But it has been a delight working with him.

You write a lot now on quite serious topics, and thinking back to other D-Generation names and people you have worked with in the past, a lot of you have moved away from comedy in the same format you had previously.

No, because there’s no TV any more. Who the hell makes sketch comedy any more? No one!

What are your thoughts on the modern landscape then? Do you think we’re missing out by not having sketch comedy any more?

God, we’re certainly missing out on satire at the moment, and my god was there ever a time that we needed it!

The world has changed so much. Digital really killed all that, because now everyone is so individually catered for that there’s no collective experience. There’s no way you could get a whole generation of kids doing something like watching Countdown every week and going to school and talking about it, because all those kids have been catered for by their own little individual niche through social media and all the other outlets. I actually think it’s quite sad.

And it’s not just kids, it’s anyone. This has led to the demise of tele, really. This is why everything’s so cheap – people just stopped watching it. The way people watch free-to-air TV has completely changed now, and the less people who watch it the worse it gets to the point now where it is almost completely unwatchable. But, in terms of comedy, nowhere picked up the mantle in Australia. There were a couple of attempts to revive it, including from myself, but they were unsuccessful and completely unsupported by the networks, really.

It’s a shame, because I think that satire which used to occur is really important now, and it’s missing.

So people like The Chaser here and Stephen Colbert in America don’t quite fill the niche?

Oh, yes, absolutely, and so of course does wonderful Shaun Micallef, but it’s still pretty niche. Most people in Australia don’t know about Stephen Colbert and haven’t really watched Shaun Micallef. Of course it’s still more [alive] in other countries, thank god there’s still Saturday Night Live, but that tradition of a large number of people regularly choosing to tune into something knowing that sacred cows were going to be poked fun at is kind of gone. It’s all more incidental now, notwithstanding the work of those wonderful people.

Just thinking of the way comedy is moving among young people; what do you think of memes as a collective experience?

Yeah. I do have children your age (25), and where things are happening is things like YouTube, and people making really good stuff on YouTube, funny stuff and things which get passed around. But there’s still an underground feel to it, and the beauty of how it used to be was it wasn’t really generationally specific. I don’t think many people over 40 regularly subscribe to their favourite YouTube channels or memes, sadly, but in previous times it was much more of a universal experience. And I really think it had an effect when there was a mass consumption of people taking the piss; people didn’t seem to take things as seriously as they do now. I’m not saying that was the cause, but I’m sure it’s some kind of influence.

Would you consider doing something online?

Actually, yes. One of the other things Simon and I are doing is having a little YouTube channel.

It hasn’t launched yet, but we’re working on the content for it. It’s basically re-miming some out-of-copyright, old TV shows from the 1960s which we have been given access to. That will launch some time in the new year.

That sounds very similar to… I can’t remember who did it, but Barge Arse…

That was D-Generation, that was me! We started that when we got an old episode of Homicide and redubbed that, but then when it moved into The Late Show, Tony Martin took what he’d done with Homicide and a couple of other shows and did Barge Arse, which was a stupid Australian cop show called Bluey, and the other one was Rush, set in colonial times.

For more entertainment news and features, subscribe for email updates from the South East Free Press

So you’re looking at doing something similar to that online now?

Soon. We’re just not quite sure when. We need some more content from our providers and that’s all in the pipeline.

It must be exciting to be launching into that new space!

Do you think radio plays are due for a bit of a revival? There have been a few popular podcasts recently like Welcome to Night Vale. Do you think there’s a market for a new modern day radio play?

I really think so! There’s the whole kind of retro aspect, the amazement of how we did things before the digital age. It links into the whole revival of vinyl – the simplicity of it appeals to a lot of people. Just having no pictures, simply hearing voices and sounds, and having to make up the rest in your head is an astonishing notion for a world which is incredibly visually and orally overloaded.

And it’s so stimulating! Hearing a radio play is quite invigorating because what happens in your head, what your brain can make up, is far more interesting and stimulating than what can be given to you on a screen, I think. You almost feel like you’ve contributed somehow, that you’ve been a part of the process. That’s what I feel.

You just feel like you’ve mentally been on this fabulous long run. Your head helped create the experience.

Mystery In The Air will start its Victorian tour next month. Visit mysteryintheair.com for more information information.

Baw Baw Citizen readers can find information on the Yarragon show at wgac.com.au.

This interview was first published in the 4 August 2017 editions of the Baw Baw Citizen and Casey & Cardinia Free Press newspapers.

For more entertainment news and features, subscribe for email updates from the South East Free Press