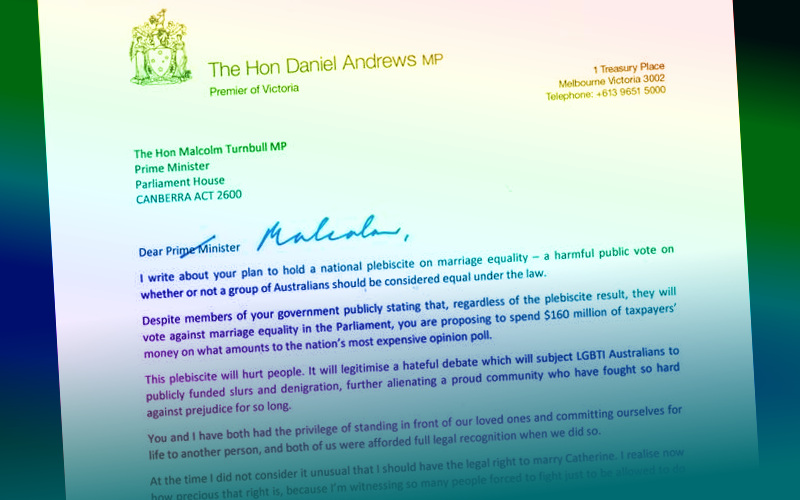 A PLEBISCITE on marriage equality would be “one final insult” to those seeking reform, according to Victorian premier Daniel Andrews.

The Labor premier made the comment in an open letter to Liberal prime minister Malcolm Turnbull, which was published on the premier’s social media accounts this morning.

In the letter, Mr Andrews also argued a plebiscite – a public vote on an issue with no binding result – would “hurt people” and simply be “the nation’s most expensive opinion poll.”

“It will legitimise a hateful debate which will subject LGBTI Australians to publicly funded slurs and denigration, further alienating a proud community who (sic) have fought so hard against prejudice for so long,” he said.

“You and I have both had the privilege of standing in front of our loved ones and committing ourselves for life to another person, and both of us were afforded full legal recognition when we did so.

“At the time I did not consider it unusual that I should have the legal right to marry Catherine. I realise now how precious that right is, because I’m witnessing so many people forced to fight just to be allowed to do what I did – to marry the person they love.

“In Victoria, equality is not negotiable. On behalf of my state, I urge you to accept there is no need for a costly and decisive plebiscite and agree to produce a bipartisan bill to amend the Marriage Act within the next 100 days.”

Mr Andrews went on to compare the plebiscite, which Mr Turnbull promised in the lead up to last month’s federal election, to the 1999 referendum on an Australian republic, which was widely criticised for being designed to fail by then-prime minister John Howard. Mr Turnbull said he is confident the marriage equality plebiscite will be supported by the Australian people.

“After a botched referendum in 1999, you accused a conservative prime minister of breaking the nation’s heart,” Mr Andrews said.

“If you fumble at this crucial moment, history will only remember you for the same thing.”

One response to “Marriage equality plebiscite ‘will hurt people’: Andrews”