If you felt a rumbling last night it might not have been your stomach.

Geoscience Australia is reporting a magnitude 2.1 earthquake was detected in West Gippsland at 12.04pm.

CORRECTION [15:05 10/10/17]: The time of the quake was 12.04pm UTC – local time was 23:04. We’re not sure why the Australian government uses UTC on their quake details sheets, but we should have noticed and apologise for the error. We’re also going to take this chance to update this article with the latest info: Geoscience Australia has revised the magnitude of the quake up to 2.5.

While the government body is pretty certain about the time the quake struck, the exact location is less certain.

Data suggests the epicentre was 2km south of Cora Lynn, 9km south of Tynong, and 14km south east of Pakenham.

But that data comes with a location uncertainty of up to 24km, meaning it’s possible the epicentre was actually closer to more densely populated areas like Pakenham and Drouin. 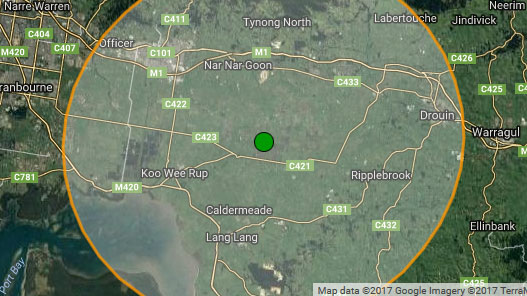 At time of reporting, Geoscience Australia’s data suggests the quake’s depth was 10km.

While comparatively small, monitors 336 kilometres away at the Mila research station in south east New South Wales detected the movement.

Information about the quake is yet to be finalised, and was last updated shortly after midnight today.

Did the earth move for you? Let us know in the comments below.